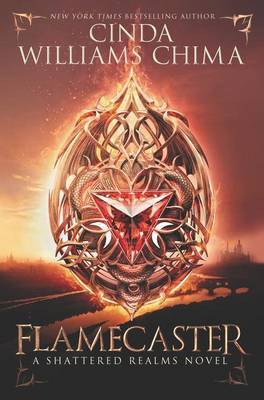 Set in the world of the New York Times bestselling Seven Realms series, a generation later, this is a breathtaking story of dark magic, chilling threats, and two unforgettable characters walking a knife-sharp line between life and death. This dazzling beginning to a new series is indispensable for fans of Cinda Williams Chima and a perfect starting point for readers who are new to her work. Adrian sul'Han, known as Ash, is a trained healer with a powerful gift of magic-and a thirst for revenge. Ash is forced into hiding after a series of murders throws the queendom into chaos. Now he's closer than ever to killing the man responsible, the cruel king of Arden. With time running out, Ash faces an excruciating choice: Can he use his powers not to save a life but to take it? Abandoned at birth, Jenna Bandelow was told that the magemark on the back of her neck would make her a target. But when the King's Guard launches a relentless search for a girl with a mark like hers, Jenna assumes that it has more to do with her role as a saboteur than any birth-based curse. Though Jenna doesn't know why she's being hunted, she knows that she can't get caught. Eventually, Ash's and Jenna's paths will collide in Arden. Thrown together by chance and joined by their hatred of the ruthless king, they will come to rescue each other in ways they cannot yet imagine.

"A welcome return for loyal fans and a splendid jumping-on point for new ones. Both will be panting for the next installment." -- Kirkus Reviews (starred review) "With full-blooded, endearing heroes, a well-developed supporting cast and a detail-rich setting, Chima explores the lives of two young adults, one at the top of the world and the other at the bottom, struggling to find their place and protect those they love." -- Publishers Weekly for The Demon King "Fans will pore over every detail and beg impatiently for the sequel. Riveting." -- Kirkus Reviews (starred review) for The Exiled Queen "The story lines are intricately plotted and the characters fully realized, even as questions about truth, loyalty, and power are explored." -- Voice of Youth Advocates (VOYA) for The Exiled Queen "Chima navigates with graceful ease through multiple viewpoints and intricately realized settings united only by a subtle current of magic. Every character is both likable and flawed, written with such clear-eyed compassion that it impossible not to sympathize with all their competing goals." -- Kirkus Reviews for The Gray Wolf Throne "Chima's tour-de-force world-building keeps readers apt, with cutthroat action sequences running parallel to the political ones." -- Horn Book Magazine for The Gray Wolf Throne "Betrayal, war, and the faith of lovers all come around to a glorious conclusion as Chima weaves together her geopolitical, magical, romantic, and even mythical themes on an epic scale." -- The Horn Book for The Crimson Crown

New York Times and USA Today bestselling author Cinda Williams Chima writes fantasy for teens of all ages, including the Heir Chronicles and the Seven Realms series. Her critically acclaimed books have appeared on numerous state awards lists. She lives in Ohio with her family, and she is always working on her next novel. Find out more at www.cindachima.com.