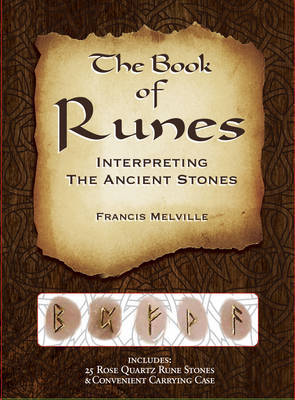 The Book of Runes: Interpreting the Ancient Stones

The history of the runes is mysterious. According to Norse mythology, Odin, the chief of the gods, hung himself in self-sacrifice from the world tree Yggdrasil for nine days and nights in order to receive cosmic wisdom. This was granted to him in the form of the runes. The word rune is derived from runa, an ancient Germanic word meaning whisper or mystery. The runes make up an alphabet that, with local variations, was used across most of northern Europe from pre-Christian times until the thirteenth century. This book explains the meanings of the runes and the Norse mythology that underpins their basic concepts. The straight, angular lines of the runes are ideal for carving into bone, wood, or stone, or forming with twigs. Different methods for making rune stones are described with instructions on how to use them for divinatory and magical purposes, from making talismans to petitioning the Norse gods.

Francis Melville has researched widely to gather his resources for this book. A student of theology, he now lives in Devon, England, where he runs a charitable foundation dedicated to research into Spagyrics--alchemical medicine. He has written for publications as diverse as The Times of London and The Fortean Times, presented a television documentary, and edited a major survey of spiritual lore. He is also the author of Love Potions and Charms, The Book of Angels, and The Secrets of High Magic, all published in North America by Barron's.