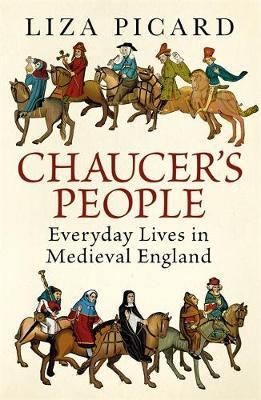 In CHAUCER'S PEOPLE, Liza Picard guides us through the tumultuous world of the late fourteenth century in an ingenious, informative and entertaining way. Through the assorted cast of pilgrims Chaucer selected for THE CANTERBURY TALES, Picard brings medieval social history to life and uncovers the detail behind Chaucer's poetic portraits. These are the lives lived beyond the court circles frequented by most of his well-heeled audience. Chaucer chose his pilgrims carefully. He sometimes raises a thought-provoking query in an apparently simple portrait. The Prioress was a sweet, pretty, well-mannered young nun; what was she doing on the road to Canterbury with a mixed band of men, instead of staying in her convent to pray? The Knight was 'a very perfect gentle knight'; but why had his military service landed him in such distant places as Lithuania and Spain? By providing these characters with a three-dimensional framework - the times in which they lived - Liza Picard opens up the fourteenth-century world to us.Drawing on contemporary experiences of a vast range of subjects including war, trade, religion, plague and banking, Liza Picard recreates the medieval world in all its glorious detail.

Instructive fun ... The writing is always lively, and there are excellent colour illustrations -- Dr G. R. Evans * Church Times * Chaucer's fourteenth-century story collection The Canterbury Tales is a classic hook on which to hang an exploration of the Middle Ages, and this take pleasingly spirals outwards to cover the characters (the nun, the knight, the miller) and the lives they would have led * History Revealed * Engaging and fun ... The premise of this entertaining book is to provide historical context for the multitude of figures in Geoffrey Chaucer's Canterbury Tales. It is well researched and packed with intriguing nuggets - from the etymology of the word "haberdasher" (from an old Icelandic word meaning a pedlar's sack), to the story of Richard Steris, "one of the cunningest players at the tenys in England", and a wonderful selection of medieval recipes ... Picard provides a wealth of detail both about the occupations of the various characters, and the wider contexts in which they operated. The section on the overwhelmingly complex nature of medieval law is particularly clear and effective -- Hannah Skoda * BBC History Magazine * Wonderfully readable and full of delights ... It buoyed me up with its brilliant insights, many of them entirely new to me -- John Simpson, BBC World Affairs Editor As you read this book, Chaucer's writing gains a depth and pungency it usually lacks ... Sometimes these snippets, in their oddness, distance the toiling pilgrims from us. At others, they bring them much closer ... There is a Chaucerian pleasure in plain sentences, plainly written. This is more almanac than argument, but no less enjoyable for that. If you were to reread The Canterbury Tales, you'd get so much more from it with this at your side ... And there are some excellent titbits -- Catherine Nixey * The Times * Chaucer's pilgrims are the first historical characters who feel like real people, and now Liza Picard makes their world as vivid and three-dimensional as the merry band themselves. Chaucer's People is a holiday in the complex, joyful, indelicate medieval world - an approachable, engaging and highly recommended account of an England which is long gone, but whose spirit lingers -- John Higgs, author of Watling Street Liza Picard, a chronicler of London society across the centuries, now weaves an infinity of small details into an arresting tapestry of life in 14th-century England. Her technique - pursued with the verve and spirit for which she is already justly admired - is to celebrate Chaucer's pilgrim portraits by resituating them within an enlarged field of medieval practices and assumptions ... Picard concludes with a speculative Chaucer continuation ... Most notably, she - a woman who has herself lived long and thought much - creates an inner monologue for the Wife of Bath, who, after visiting the shrine, drifts into a Molly Bloomian soliloquy, reflecting on the pros, cons, and possible personal advantages of taking the veil. As in the rest of the book, we here encounter not presumption but homage, an enthusiast enacting her respect for Chaucer's enduring and indelible accomplishment -- Paul Strohm * The Spectator *

Liza Picard was born in 1927. She is the author of many acclaimed works of social history, including RESTORATION LONDON, DR JOHNSON'S LONDON and VICTORIAN LONDON. She read law at the London School of Economics and worked for many years in the office of the Solicitor of the Inland Revenue and lived in Gray's Inn and Hackney, before retiring to become a full-time author. She lives in London.