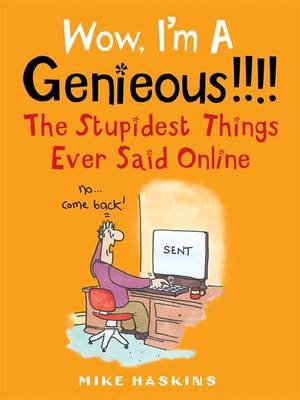 Wow I'm a Genieous!!!!: The Stupidest Things Ever Said Online

This is a hilarious collection of the weirdest, stupidest and most outrageous things ever said on the internet on sites such as Facebook, Twitter, Ebay, Amazon, YouTube and even in good old-fashioned emails. Years ago if you said or did something stupid or embarrassing, it would have remained relatively private and have would soon been forgotten. Now thanks to advances in technology every cringe-making remark that we make online is preserved not only for the rest of eternity but is also instantly available for all the world to see! Wow! I'm a Genieous! presents an irresistible collection of ill-thought out comments, opinions, online disputes and sheer unashamed ignorance. So join us as we find the people who put the twit in Twitter and the mess in instant message. Contents include: Stupid Questions and Stupid Answers: e.g. "Does anyone know Obama's last name?" "Are there any lakes in the Lake District?"; Angry Outbursts: Furious, insane or wildly over the top comments from You Tube etc Harrods it ain't - buying and selling on the internet: "I won a filthy Powerbook 540 which took about one month to arrive. The seller clearly used rubbish from their bin to pack the box; complete with McDonalds wrappers with old french fries and lettuce!" Observations To Leave You Speechless: "Does it rain in Australia? Because it's the other side of the world doesn't the rain just fall away into space?", "The Olympics has been going three thousand years?! We're only up to 2012!" "I like to tape my thumbs to my hands to see what it would be like to be a dinosaur." Reviews from Hell: "The beach was too sandy and there were too many fish in the sea...", "We went on holiday to Spain and had problems with the taxi drivers as they were all Spanish". Online Slip Ups: Internet-based disasters e.g. the school headmaster who asked his bursar to reply to a complaint from an old lady by telling her to "get stuffed" but accidentally copied her in on the message. Communication Problems: Extraordinary spelling mistakes and terrible grammar e.g. "nothing more fun than wachting sex and city and raping Christmas pressants", "Why is the USA bombin Labia?" People Who Really Don't Deserve Our Money: e.g. An email from a Euromillions winner promising you a share of their win. As if!

George Orwell was wrong. Big Brother isn't watching you but thanks to the internet everybody else in the world is!

MIKE HASKINS has written a number of humour books including the bestselling joke collection Man Walks Into A Bar. He has also written scripts for the likes of Steve Coogan, Simon Pegg, Milton Jones, Punt and Dennis, Smack the Pony and Smith and Jones.