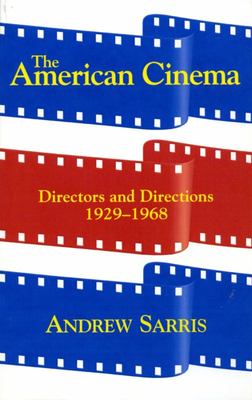 The auteur theory, of which film critic Andrew Sarris was the leading American proponent, holds that artistry in cinema can be largely attributed to film directors, who, while often working against the strictures of studios, producers, and scriptwriters, manage to infuse each film in their oeuvre with their personal style. Sarris's The American Cinema , the bible of auteur studies, is a history of American film in the form of a lively guide to the work of two hundred film directors, from Griffith, Chaplin, and von Sternberg to Mike Nichols, Stanley Kubrick, and Jerry Lewis. In addition, the book includes a chronology of the most important American films, an alphabetical list of over 6000 films with their directors and years of release, and the seminal essays "Toward a Theory of Film History" and "The Auteur Theory Revisited." Over twenty-five years after its initial publication, The American Cinema remains perhaps the most influential book ever written on the subject. First published 1968. Physical Info: 2.11 cms H x 20.35 cms L x 13.79 cms W (0.43 kgs) 392 pages